If you’re trying to think of the joke answer, let us know later (because we don’t have it), but for now we’re asking this question seriously. Why would you ever paint a cow like a zebra? To answer that, we first have to ask another question that sounds like a joke setup – why does the zebra have stripes?

What is the evolutionary purpose behind the zebra’s iconic black and white stripe pattern? The most commonly assumed answer is camouflage – that when moving in large herds, the stripes cause an optical illusion which makes individuals difficult to pick out by predators. There is also the possibility that the colour pattern may help them stay cooler in the intense African heat.

Now, however, an alternative option is on the table – that the stripes ward off biting flies. For reasons unknown, biting flies tend to avoid landing on striped and spotted surfaces. So, either by evolutionary circumstance, or perhaps by chance, the zebra’s stripes can keep it from being bitten, which in turn lessens the likelihood of getting a disease from said flies. Pretty advantageous.

An interesting piece of trivia, you might say, but what else can we do with this information? Well, this is where things get curious. In sub-Saharan Africa, there is a continuing problem with cattle being attacked by flies; specifically, tsetse flies, which transmit trypanosomiasis. About 45-50 million cattle are threatened at any one time, and the disease is a serious problem for animal welfare and also causes economic loss, as the cattle die and the meat is not safe to eat. Horses are also at threat. Cattle have not been in Africa long enough to have evolved natural immunity to the disease or to develop systems of warding the flies off, relegated to simply using tail flicks and head shakes to shoo the pests away. The stress of being bitten by hundreds of flies can cause the animals trauma, which can reduce milk yield in dairy cows. While Africa might be disproportionately affected, the problem with cattle being infected by flies is a global one – the US cattle industry loses a staggering $2 billion each year as a result.

Now, researchers in Japan have discovered that an unexpected and rather novel method may be the solution – to paint the cows like zebras. Yes, it seems that whatever it is about the zebra pattern that repels flies works on other animals. In (an admittedly small) study, they painted six cows like zebras, and kept them in the same paddock as unpainted cattle. They found that the number of fly bites was significantly less for the painted cows, decreasing the incidence of biting flies landing by fifty percent. This poses the interesting idea that simply painting cattle and horses like zebra would decrease the number of bites, improving animal welfare and lessening economic loss. 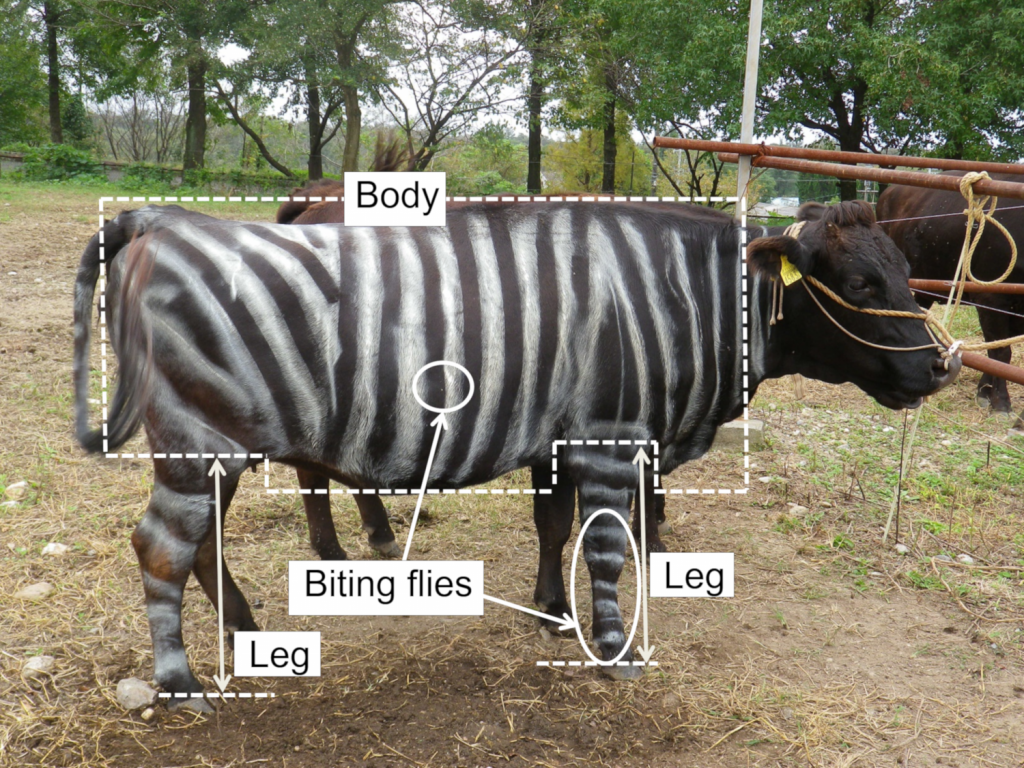 Just be careful next time you go on safari – the herd of majestic zebras in the distance might not be zebras at all.